Memorial to Jewish Refugees Shut Out by Canada in Halifax

Designed by the Polish-born son of Holocaust survivors, American architect Daniel Libeskind, the contemplative, motorized Wheel of Conscience was unveiled Thursday at Pier 21.
The exhibit honours the memory of European Jews seeking refuge from Nazism 72 years ago. They were aboard an ocean liner, the MS St. Louis, and were looking for sanctuary from state-sanctioned bigotry.
Canada and other countries shut the door.
If the St. Louis had been allowed to dock here, it would have berthed at the Halifax waterfront, perhaps just a stone’s throw from where the well-attended unveiling took place.
But since no port was open to them, more than 900 Jews were shipped back to Europe and many died in Hitler’s concentration camps.
Libeskind’s Pier 21 piece, created with a grant to the Canadian Jewish Congress from the federal government, has moving gears to symbolize the connection between intolerance and xenophobia and anti-Semitism. 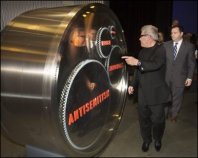 Photo by Andrew Vaughan/CP shows Daniel Liebeskind (Architect) and Jason Kenney with Wheel of Conscience unveiled January 20, 2011 to be located on Pier 21 in Halifax.
Does this story remind us of the "hardening" toward political refugees that we see in Ottawa, according to Cabinet Minister Vic Toews?
This country prides itself on being "open and welcoming" to those less fortunate who seek the freedom and the justice and the opportunity that Canada is alleged to afford and yet, we have a history replete with racism and bigotry and hatred and we are not doing enough to represent that history to our students and our political classes.
Recently, reports of vandalism against the homes of Jewish citizens of Montreal were on the front pages.
A rabbi, interviewed by CBC, was seen and heard crying the words, "I do not understand why I am hated for being who I am!"
Neither does anyone else "understand" this hatred, this bigotry and this violence against other human beings, "because they are who they are".
From the Chronicle Herald piece, cited above
In a recent opinion piece, Canadian historian Irving Abella, master of ceremonies at the Pier 21 event, wrote in the Globe and Mail that there is "redemptive irony" in the unveiling.

"The very place where Jewish refugees would have landed and found safety, only to have the gate slammed in their face, will now host a permanent monument to their memory," he said in his commentary.
As for the man who invented the Wheel of Conscience, Libeskind’s method of creating things for his clients is straightforward, he once told the New York Times.
"I put myself in the spirit of the place," he said. "My goal is to invent something memorable that isn’t obvious but is connected to the roots of the place."
He told reporters after the Halifax unveiling that the tragedy of the St. Louis "cannot be unmade." But hatred and injustice continue in society today, said Libeskind.
"The issues of bias and racism and of anti-Semitism are not gone into the past — they’re all around us in our world," he said.
Posted by acorncentreblog.com at 5:40 AM