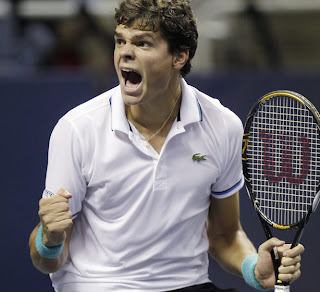 You may have heard the story by now.
How eight-year-old Milos was judged too young and spindly to join (Casey) Curtis’s class at Richmond Hill’s Blackmore Tennis Club.
How, instead, Milos and his father, Dusan, would tramp to the club before dawn and then again well past dark to practice with a ball machine. The odd hours saved the Raonic family money on court fees.
After a few months, Curtis agreed to take the youngster on.
Curtis coached Raonic until he was 17. At that point, he had to decide if he was willing to leave his young family and follow Raonic around the world. He decided to hand his prize pupil off.
Raonic finished high school a month after turning 16. Dusan insisted that until he cracked the ATP’s top 100, Milos had to take university courses to prepare for an alternate career. After Sunday night’s win, he is now ranked 59th in the world. He stopped taking those courses a few days ago.
He is within spitting distance of Andrew Sznajder’s record ranking for a Canadian man — 46th.
We’re on the cusp of something wonderful in the domestic game.
Apparently, Milos Raonic (Rounich) and his parents emigrated from Yugoslavia "to give their kids a better future" in his father's words. And when Milos was 8, with his mother working on the east side of Toronto, in Scarborough, and his father working approximately one hour west, in Cambridge, Milos and his brother were too young to leave alone at home after school, until their parents arrived.
The choice was a Tennis Club where Milos went every day, without missing a single one.
Today, at 20, with a second serve at 140 miles per hour, his defeated opponent, world No. 9 Fernando Verdasco, was left commenting after the match, "With that kind of serve, you are not playing tennis any longer; it is some other game!"
In his own words, from an interview aired on Rogers' Sportsnet yesterday, "It is not as if something dramatic has happened; it is more like things have just come together for me!" He was commenting on his surprising win, surprising at least to the rest of the world,
Now, Canada is apparently poised to have a tennis season in which one of our own will carry the Maple Leaf flag as he climbs up the rankings.
When asked if he would play 'under the Canadian flag', Milos immediately replied, "Of course, Tennis Canada was there for me from the beginning and of course I will play for Canada throughout my career."
There are unconfirmed reports that Milos Raonic has ice water in his veins, making him virtually unflappable especially under intense pressure, and that his serve is so over-powering that opponents play so far back as to be nearly in the spectators' seats behind the baseline.
2011 could be an exciting season of tennis for Canadian devotees to the game, so dominated by players from around the world for so long, without a Canadian entry in the elite matches.
Posted by acorncentreblog.com at 5:14 AM