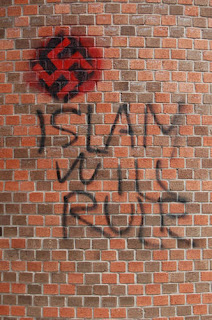 Photo by Chloe Fedio, Toronto Star
By Chloe Fedio, Toronto Star, August 5, 2011
Rabbi Jarrod Grover doesn’t know if the person who defaced his North York synagogue was a neo-Nazi, a radical Islamist — or both.
But after discovering a swastika spray-painted next to the message “Islam will rule” on the building’s exterior brick wall late Thursday afternoon, Grover has an even more pressing question.
“The scary part is that we have to ask ourselves, ‘What are these people capable of?’ Is this just spray paint or do we have bigger concerns?” said Grover. “People are nervous. People are afraid.”
The Beth Tikvah synagogue on Bayview Ave. south of Finch Ave. E. rents space to the Robbins Hebrew Academy, a Jewish school from nursery to Grade 8.
The Toronto police hate crime unit is investigating two other “very similar” cases of anti-Semitic graffiti that were found in the same area this week, said Const. Tony Vella. There are no suspects yet, but Toronto police are reviewing security footage from the synagogue parking lot.
While the investigation is responsible for determining the author and his/her motives for this hate crime, there are some words from Ayaan Hirsi Ali's book, Nomad, that might shed some light on the situation generally. In addition to the prohibition of criticizing the Quran and the Prophet, and the life-long learning by rote, that "closes the Muslim mind," she writes, It is also the continuous construction of conspiracy theories about enemies of Islam who are determined to destroy the one, true religion.
The chief enemy is the Jew.
When I was a pious Muslim in my teens, I made my regular ablutions. In those days, when every splash of water I cursed  the Jews. I covered my body, spread a prayer mat, faced Mecca, and asked Allah to protect me from the evil that is spread by the Jews. I hurried to our local mosque and joined the crowds in prayer. We lined up--in the women-only section--and followed the instructions of the male imam, who was invisible to us. We cried in unison 'Amin' to all his supplications to Allah, and when he called Allah to destroy the Jews, I also fervently said, 'Amin.'
When I was in secondary school I pored over magazines published in Iran and Saudi Arabia that contained graphic photographs of men and women covered in blood. The captions always identified the dead as victims of the Jews. Even thought I was a curious child, and as a teenager was an even more curious student, I never questioned the veracity of the pictures, the captions under them, of the stories of how the Jews killed and maimed Muslims like me.
In Nairobi after school I attended classes in Islamic centers generously provided to the public by wealthy men from Mecca and Medina. I believed that these wealthy men had built these centers our of kindness and goodness; they were practicing Zakat, or charity,the third pillar of Islam. I listened to one teacher after another talk about how the Jews had declared war of Islam. I learned that the Prophet Muhammed, the holiest of all holy men, in whose footsteps we Muslims all aspired to follow, had warned of the treacherous and evil ways of the Jews. They had betrayed him and tried to kill him, for wherever there is a Jew he plots and plans to destroy Islam. He smiles at the Muslim, but deep inside he hates him. He extends his hand to the Muslim in pretended peace, all the while enticing him toward a trap of debt, debauchery and sin.
I swallowed all this propaganda as the whole truth and nothing but the truth.
The other students who joined those lessons were as diverse as any group of students in a city like Nairobi; their families were from Yemen, Somalia, Pakistan, Sudan, and various Kenyan regions. But we identified ourselves first and foremost as Muslims; ethnicity was no barrier to our deeper loyalty to our faith. In the name of Islam we digested the anti-Semitic propaganda that was offered to us. It came to us in the mosque, in our religion classes at school, in Islamic centers, and from Islamic radio, magazines, pamphlets, television stations and audiocasettes (and later, videos, DVD's, and blogs and other online instruments). Jews were bloodsucking, lethal enemies of Islam.
Some of my fellow students, selected on the basis of their piety and loyalty to Islam, were offered special scholarships to further their study of religion in Mecca and Medina, the holy cities of Saudi Arabia, and in Lahore or Teheran. They came back to Nairobi after a few years and, like Jehovah;'s Witnesses int he West, went from door to door in their respective neighbourhoods. They preached Islam, of course: prayer, charity, fasting and the pilgrimage to Mecca (if you can afford it). But they also made thousands of believers aware of an enemy that lurked in the shadows, ready to attack them: the Jew.
When I reflect back on this particular strand of anti-Semitism, I see three distinct features. The first is demographic power: increase the number of people who believer that Jews are their enemies. The second is to use Islam as a vehicle to promote anti-Semitism. The third is psychological: present the Muslim as an underdog fighting a powerful and ruthless enemy.
A Somali woman poet, Safi Abdi, who is clearly immersed in this same propaganda, recently published a poem in English that is a perfect illustration of this strategic triangle:

In this poem the Jews are a scapegoat for evil and Islam is a unifying force against evil. Muslims are called upon to ignore their local problems of war, poverty and tyranny and to unite against Israel, the Zionists, the Jews. This is the anti-Semitism of the twenty-first century. A Muslim who questions the existence of this enemy of his motives is either a fool or a traitor and a heretic.
Europe's long tradition of Christian and pseudo-scientific anti-Semitism was taken to its logical conclusion by Hitler and the Nazis, with the willing help of many other Europeans who participated in his program of Jewish annihilation. The evil of this "Final Solution" was exposed after the defeat of the Third Reich and combated thereafter by the reeducation of ordinary Germans, the memorialization of the Holocaust, and the stigmatization or prohibition of neo-Nazi groups. As a result, by the end of the twentieth century most civilized people in the West believed that European anti-Semitism was a thing of the past.
But it is not. It has mutated into something new: Arab Islamic anti-Semitism has replaced European anti-Semitism. The new anti-Semites have borrowed a few tricks from the Nazis. They employ propaganda tools, such as the counterfeit Protocols of the Elders of Zion, that were developed by the Nazis. However, they also have something that the Nazis did not have: a world religion that is growing faster than any other religion, a warrior faith that is espoused by over one and a half billion people. Hitler had Mein Kampf, and the might of the German Wehrmacht; today's anti-Semites, like the Iranian leader Mahmoud Ahmedinejad and Osama bin Ladin, have a holy book, a far greater demographic power, and a good chance of getting their hands on a nuclear weapon.
Despite outer appearances, the conflict between the Israelis and Palestine int he Middle East is no longer about territory. It may seem to be so to Jews and Americans, but from the Arab Islamic perspective it is a holy war in the name of Allah, and victory will come only if the Jews are destroyed or enslaved, if all infidels are killed, converted of 'dhimmified' into the status of submissive, second-class citizens.
Wars are never fought only on battlefields with military means. Israel, America, and Europe may have stronger armies, but Islam has the numbers. The targets of Muslim propaganda---women, gay people, infidels, Christians, atheists and Jews---are divided among themselves. The more these groups in the West are divided, the better for Islam. Shia and Sunni Muslims may hate one another; Arab Muslims may degrade African Muslims as slaves; Turks and Persians may look down on Arabs. But at the end of the day, when an imam calls from Tawhid, unity in the oneness of Allah, and performs the takbir, 'Allaha Akbar,' nearly all Muslims unite.
For Muslims to stay united, however, Islam needs an enemy, conspiracy theories, and a rival creed. Jews are the best scapegoats, for the conspiracy theory that claims they control the world is believed by many. I have heard a Muslim theologian in Holland preach that all evil has been brought to humanity by the Jews. According to him these evils are communism, capitalism, and individualism. He pointed out that Karl Marx was a Jew, Milton Friedman was a Jew, and Sigmund Freud was a Jew. Marxism is an atheist creed and therefore an enemy of Islam. Free enterprise is a distraction from prayer; it involves the ungodly pursuit of earthly wealth and a system of lending a borrowing with interest (usury), which is forbidden by Islam. So capitalism too is an enemy of Islam. Acknowledging individual urges, dreams, consciousness, and layers of subconsciousness replaces a focus on the hereafter; virtues and vices are not seen as tensions between following the straight path of Allah and that of Satan but as the result of natural and psychological causes. thus Freud and his followers are also enemies of Islam
Islam is not just a belief; it is a way of life, a violent way of life. Islam is imbued with violence, and it encourages violence.
Muslim children all over the world are taught the way I was: taught with violence, taught to perpetrate violence, taught to wish for violence against the infidel. the Jew, the American Satan.
(from Nomad, pp. 197-201)
Perhaps it would serve the police forces in North York, in Toronto and across the province and even the country to read Ayaan Hirsi Ali's books. Clearly, all our political leaders and religious leaders and educators and policy wonks should read her books, along with those that stress the values of multiculturalism, a deep and respected theme in Canadian and Western countries, challenged now more than ever by the proponents of radical Islam.
This is another "framing" of the political tensions of the current global geopolitics, not to mention the hates crimes of painting heinous swastika's on synagogues and Jewish schools.
Posted by acorncentreblog.com at 9:33 AM