By Brian Urquhart, New York Times, September 16, 2011
Brian Urquhart, a former under secretary general of the United Nations, is the author of “Hammarskjold,” among other books. 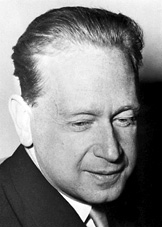 The second secretary general of the United Nations, Dag Hammarskjold, died 50 years ago this weekend on a mission to the Congo, when his plane crashed on its landing approach to Ndola, now in Zambia, then Northern Rhodesia. In his eight years at the United Nations, he brought vitality to the world organization and established its secretary general as a major player in global affairs.

Hammarskjold’s resolute international leadership has never been equaled. He developed the role of the secretary general at a particularly dangerous point in history to such a degree that “Leave it to Dag” became a slogan, even as he ran the risk of arousing the ever-vigilant defenders of unlimited national sovereignty. The men who succeeded him (when, at last, will a woman be nominated?) have often been measured against Hammarskjold, and they have referred to him as a model for their own efforts.
When Hammarskjold arrived at the United Nations in April 1953, most of the members of the Security Council were under the impression that they had voted for a competent Swedish civil servant who would not rock the boat or be particularly active or independent. The next eight years were quite a surprise.
By 1953, the cold war had virtually paralyzed the Security Council. Regional conflicts were potential brush fires that could ignite a nuclear East-West confrontation, and Hammarskjold became an accepted go-between; his first success was to negotiate the release of the American airmen who had come down in the People’s Republic of China during the Korean War and been imprisoned as spies.
Some of the most powerful nations, including the United States, came to view Hammarskjold as an outstanding leader, even if they sometimes disagreed with him. Nikita S. Khrushchev’s Soviet Union and Charles de Gaulle’s France did not see him in this light. In a famous scene in the General Assembly, Khrushchev demanded his resignation. Hammarskjold refused and received a standing ovation.
Of all the people I have known, Hammarskjold was by far the most successful in organizing his public life and his widespread intellectual, spiritual and aesthetic interests into an integrated and self-sustaining pattern. Literature in three or four languages, music, the visual arts and nature were his beloved companions, and his posthumously published diary, “Markings,” showed that he was developing his own version of mysticism. His friend the sculptor Barbara Hepworth said, “Dag Hammarskjold had a pure and exact perception of aesthetic principles, as exact as it was over ethical and moral principles. I believe they were, to him, one and the same thing.” But Hammarskjold’s feet were firmly on the ground. “The United Nations was not created to bring us to heaven,” he told an audience in 1954, “but to save us from hell.”
Hammarskjold had few of the conventional trappings of a leader. For the secretariat, his authority was absolute because we respected the intellectual and moral effort and the judgment that went into his decisions, and the calmness and lack of pretension with which they were communicated. There is a photograph of him reviewing the first contingent of the first United Nations peacekeeping force on its arrival at Abu Sueir on the Suez Canal in 1956. His slight, lonely and profoundly unmilitary figure dominates the scene and leaves no doubt as to who is in charge. There was, I think, more than a touch of genius in Hammarskjold’s passionate and imaginative service. It is this that makes him so  hopememorable.
The excitement, danger and of Hammarskjold’s time at the United Nations are hard to recall and impossible to replicate. Governments reach agreement in the organization and outside of it to a far greater extent than before. The Security Council is exploring new ground under the concept of the “responsibility to protect.” The international and independent leadership that was Hammarskjold’s hallmark is conspicuously lacking.

What sort of person do governments want as the secretary general of the United Nations? For all the tributes pouring forth on this anniversary, there is no evidence that the members of the Security Council have ever tried to find another Hammarskjold. Can it be that eight years of dynamic leadership half a century ago was enough for them?
The Security Council has recommended, and the General Assembly has approved, a second five-year term for Secretary General Ban Ki-moon. But the process of finding his successor by an imaginative, widespread search procedure should start soon. In a time of ominous global problems, the example of Dag Hammarskjold could provide important guidance in that search.
Here was a global leader before globalization of the economy, in the middle of the Cold War, prior to the onset of both 24-7 gossip dressed up as news, and the internet, dressed up as communication. It was his presence, his imagination, the force of his integrated person that commanded, demanded and received, without rancour or resentment, the respect, and loyalty, of world leaders, of all stripes.
Is there such a person today, and would the culture even permit such a person today?
Have we so contaminated our public discourse by the scurrilous attacks that are dredged up as "reporting" and the coverage of those willing to engage in public life, to reduce both them and us to conform to our heightened level of both cynicism and narcissism.
We grew up in the fifties, almost in awe of this man, whose name we could barely pronounce, but whose leadership of the newly formed United Nations made him almost above national and regional political messes, the details of which we were shielded from by the amount of information available to us.
We cannot imagine a current Secretary General uttering words even similar to those uttered by Hammarskjold: "The UN was not created to bring us to heaven but to save us from hell."
Facing what was then the threat of annihilation from nuclear weapons, building bomb shelters in the basements of public buildings, taking classroom drills "in the event of an attack" even listening as we did this week to Jacqueline Kennedy Onassis tell Arther Schlesinger, in interviews she did with the famous American historian, four months after the death of her husband, John F. Kennedy, "we want to die on the lawn of the White House with you if the bomb shelter is full" (although this reference was more to the Cuban missile crisis of 1962, when the Secretary General was no longer in office)....we can attest to Urquhart's claim that it was an "exciting" time in history.
The next decade will be no less "exciting" and will require no less a leader at the helm of the United Nations than, (not a duplicate for there is none but) an equal or superior to Mr. Hammarskjold...and in order for such a person to be found and accepted, we will have to raise our sights on the possible, in political, military, peace-keeping and international security theatres, not to mention the take-over of the economic, fiscal and monetary files, of all national and international issues.
The selection, acceptance and success of leaders are all directly related and attributable to the level of acceptance and support and internal strength of those being led and our weakness, including our disengagement and our cynicism of leaders, witness the current level of attack on the president of the United States, while he attempts to lead a literally and metaphically intransigent Congress, can do nothing but harm our own prospects of achieving resolution of the most intractable gordion knots of international relations.
From the Nobelprize.org website
Dag Hjalmar Agne Carl Hammarskjöld (July 29, 1905-September 18, 1961) was the youngest of four sons of Agnes (Almquist) Hammarskjöld and Hjalmar Hammarskjöld, prime minister of Sweden, member of the Hague Tribunal, governor of Uppland, chairman of the Board of the Nobel Foundation. In a brief piece written for a radio program in 1953, Dag Hammarskjöld spoke of the influence of his parents: "From generations of soldiers and government officials on my father's side I inherited a belief that no life was more satisfactory than one of selfless service to your country - or humanity. This service required a sacrifice of all personal interests, but likewise the courage to stand up unflinchingly for your convictions. From scholars and clergymen on my mother's side, I inherited a belief that, in the very radical sense of the Gospels, all men were equals as children of God, and should be met and treated by us as our masters in God."

Posted by acorncentreblog.com at 8:11 AM