Occupy Together grows worldwide? Hedges calls these people "our best" 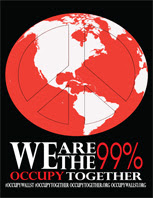 The Occupy Wall Street demonstration started out last month with fewer than a dozen college students spending days and nights in Zuccotti Park. It has grown significantly, both in New York and elsewhere as people display their solidarity in similar protests.
Organizers in Toronto and several other Canadian cities say they plan to follow the New York example. Activists say they plan to converge on Toronto’s financial district on Saturday Oct. 15, and will wait to march on the streets until the Toronto Stock Exchange opens on the Monday. Other protests are also planned for Calgary, Victoria, Ottawa, Montreal, Nova Scotia and Newfoundland, according to a website called Occupy Together.
Nearly 800 people say they plan to attend the Occupy Toronto event, according to its Facebook page. In Vancouver, more than 1,000 people have said on Facebook that they plan to occupy an area outside the Vancouver Art Gallery. Those attending have been asked to bring tents with them, and the group’s Facebook page says protesters will stay “as long as it takes.”
The Occupy Together website suggests similar events are being planned in Mexico, Australia, Tokyo, about a dozen European countries, and more than 40 U.S. states.
The arrests of more than 700 people on Saturday as thousands tried to cross the Brooklyn Bridge seemed to pour oil on the rage of those who camped out overnight in Zuccotti Park, a private plaza off Broadway near Wall Street.
The growing, cross-country movement “signals a shift in consciousness,” said Jared Schy, a young man sitting squeezed between three others who participated in Saturday’s march from Manhattan’s Financial District to the bridge.
“We don’t care whether mainstream media covers this or people see us on television. What counts are the more than 30,000 viewers following our online live stream,” he said. “We heard from a lot of them, and they’re joining us now!”
The protest has drawn activists of diverse ages and occupations, including Jackie Fellner, a marketing manager from Westchester County.
“We’re not here to take down Wall Street,” she said. “It’s not poor against rich. It’s about big money dictating which politicians get elected and what programs get funded.”
On Sunday, a group of New York public school teachers sat in the plaza, including Denise Martinez of Brooklyn. Most students at her school live at or below the poverty level, and her classes are jammed with up to about 50 students.
“These are America’s future workers, and what’s trickling down to them are the problems – the unemployment, the crime,” she said. She blamed Wall Street for causing the country’s financial problems and said it needed to do more to solve them.
The New York protesters have spent most of their time in the plaza, sleeping on air mattresses, holding assemblies to discuss their goals and listening to speakers including filmmaker Michael Moore and Princeton University professor Cornel West.
How big this "movement" grows and how quickly will depend on the kind of media it generates. And that does not mean the traditional radio, television and newspaper "media". It means the "social media" because that is the new media that matters to these protesters. We have seen flash mobs around the world, some of them risking their lives to oppose dictatorial regimes. We have seen flash mobs around the world trashing whatever was in their path. Now, we are witnessing a truly grassroots movement of people whose bodies are their political statement, and whose lives are being shaped by their coming together at a critical time in the world.
And if, in fact, this movement grows around the many capitals of the world, and unites those 99% who feel dispossessed, and rightly so, the people in power in various capitals will be unable to stop or to resist the demands of that 99%, whatever they become.
Up to this point, they have not declared specific demands; they are meeting and talking and listening to various speakers in their "informal city-in-the-park"....and they will stay there as long as their bodies and their health and their political effectiveness endure. Nevertheless, it is clear that the "suits" will not retain power in the same "untouhable" manner as they have recently; and so it should be...after all they have squandered their elected power by acting in the best interests of the money that "bought" their elections.
I think one of the most telling moments in this movement will be the kind of reception it generates in cities like Bejing and Moscow, and Lahore and Mumbai, if it reaches into those cities and countries. Another telling indicator will be the names of the speakers permitted to address their number. For which Washington politician would not salivate at the opportunity to address numbers generated without cash, without promises and without expectations. Michael Moore, Cornel West...of course. But wait to see if and when Sarah Palin wades into their midst. Will they consider her part of the 1%? Will they consider all elected politicians part of the 1%? Will they even stop their own conversations long enough to listen to the 1% voices? Doubtful.
The unarmed "army" of nonviolence is, and has proven to be, one of the most powerful political instruments known throughout the world. The silent, persistent, non-violent protester has stopped wars, has brought politicians to their knees, has turned the tide of history in many instances and has now raised the red flag that says to the rich and powerful, STOP! ENOUGH!
And it is about time!
Posted by acorncentreblog.com at 5:30 AM