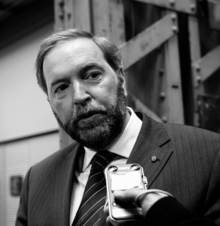 Thomas Mulcair has just been elected as leader of the New Democratic Party in Canada, following the untimely death of former leader Jack Layton last summer.
A former member of the Quebec Liberal government of Jean Charest, a former labour lawyer, Mr. Mulcair defeated Brian Topp on the fourth and final ballot. The two other candidates who finished in the top four were Peggy Nash and Nathan Cullen.
One of the themes of the leadership campaign was the question of the relationship betwen the NDP and the Liberal Party, nearly annhiliated on May 2, in the last federal election.
Som irony: a former NDP Premier, Bob Rae is the interim leader of the Liberals, while a former Liberal cabinet minister is now the leader of the NDP. Could there be a next chapter of this narrative that sees these two "progressive" parties forming a united front to defeat Steven Harper. Some certainly hope so; others reject that prospect as one that would "water down" social democratic principles that form the cornerstone of the NDP foundation.
The fiery Irishman is one of several children, known for his quick brain and angry retorts in the House of Commons, and some suggest also in his personal relationships.
He has inherited a complex and challenging set of issues including among others:
Mr. Mulcair will have to perhaps shed a few layers of his acknowledged considerable pride, demonstrate his capacity to both listen and to honour "the other" in a party whose history and tradition may well still be somewhat foreign to his political tastes and experience. There are literally millions of Canadians who want the Harper government to be "given the boot" as other candidates put it throughout the convention this weekend, and many will be counting on Mr. Mulcair and his colleagues to be the primary agents for that deeply held wish and hope.
Posted by acorncentreblog.com at 10:34 PM