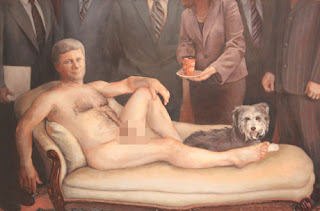 Margaret Sutherland's painting is on display at The Kingston Frontenac Public Library central branch for the Kingston Arts Council's annual art show. The 1.5-metre wide canvas depicts Harper naked on a chaise longue, along with a grey dog, surrounded by faceless people in business attire. The female "suit" is handing Harper a Tim Hortons cup on a silver tray. (from CBC news website, May 18, 2012)

The portrait is a modern and satirical take on Renaissance nudes like Giorgione's Sleeping Venus and Titian's Venus of Urbino
For sale for $5000,  that 'value' does not begin to capture the national dialogue and the level of interest in the political satire the painting has evoked.
Quite predictably, the PMO was not impressed because the PM is rather a 'cat person'. However, the satire is so elegant, eloquent and tasteful, while reversing the roles of men and women (as compared to the original painting on which this one is modelled). In the original, a nude female was being served by a black female slave.

The nude image of the PM says much and very appropriately about the old adage, 'the emperor has no clothes' because all of the Canada can see through his chicanery, and his political illogic, and his refusal to accept and base his arguments on science, facts, empirical reality and common sense. He prefers, rather to pander to his conservative base, providing increased sentences for criminals, less flexibility for judges in sentencing, no protection for the environment, military purchases in the billions and "austerity" in the dismissal of at least 20,000 civil servants.
Furthermore, his 'cabinet' serfs compliantly serve his every wish and whim, through modelling their performance in the House of Commons and in committee, on his stone-walling, his distraction, his bluster and contempt for anything 'socialist' or previously, "Liberal". Talking points dictated by the PMO are recited daily on such television programs as CBC's Power and Politics by these sycophants who apparently owe their political existence to this man, or at least he has convinced them that they do.
Stepping out of line, as the PM sees it, is so reprehensible as to render the deviant thrown under the bus, all the way from removal from cabinet, to removal from caucus, to removal from the party itself.
So, painting a row of suits, including one female "suit" willing to bring the PM his "every wish" is so cogent and so pungent a satire, as to recall Jonathan's Swift's "A Modest Proposal".
I am no art critic, and certainly can claim no training or expertise in art appreciation, although I do generally know what I like and why, without being able to express it in "artistic language"...nevertheless, as a political document, this painting stands on its own as one of, if not the, best pictures of the Harper regime in Ottawa.
One can expect to see its likeness on campaign literature across the land, on behalf of the opposition parties, if they have both the wit and the courage.
Posted by acorncentreblog.com at 11:42 AM