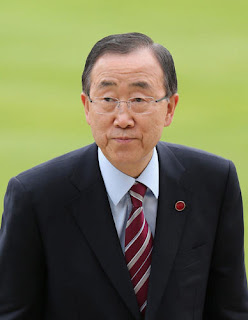 UN Secretary General Ban Ki-Moon
By Michelle Nichols, Reuters, in Toronto Star, August 8, 2012
United Nations chief Ban Ki-moon warned on Wednesday that Mali was becoming a safe haven for “terrorist and criminal” groups as West African countries pushed for the UN Security Council to back the deployment of troops to stabilize the country.
Islamist militant groups control about two-thirds of Mali after hijacking a secular rebellion earlier this year, and then seized more territory after a March 22 military coup toppled President Amadou Toumani Toure in the southern capital Bamako.
Ban told the UN Security Council that the Islamists had illegally imposed Sharia law in the north of Mali, where the security situation was now volatile and unpredictable. Mali was once seen as a rare stable democracy in a tumultuous region.
“With the influx of regional and international Jihadists, there is reason to be concerned that the north is becoming a safe haven for terrorists and criminal elements,” Ban said.
West African bloc ECOWAS is pushing for the deployment of a 3,000-strong intervention force in Mali to restore stability in the capital of Bamako, and then improve Mali’s defeated military to help it retake the north.
ECOWAS, an umbrella group of 15 countries aimed at promoting regional cooperation, has intervened militarily in past African conflicts, such as the wars in Liberia and Sierra Leone.
The UN Security Council last month endorsed political efforts by West African leaders to end the unrest in Mali, but stopped short of backing force. It said it was ready to examine a request by ECOWAS for a UN mandate for intervention once more details were provided on the plans.
The Security Council has also called upon UN member states to submit names of Al Qaeda-linked individuals, groups or entities connected to Mali’s unrest to the council’s Al Qaeda sanctions committee for inclusion on a UN Al Qaeda blacklist.
So far no new names from Mali have been added to the blacklist.
Ban encouraged “the Security Council to give serious consideration to the imposition of targeted travel and financial sanctions against individuals or groups in Mali engaged in terrorist, religious extremist or criminal activities.”
ECOWAS Commissioner for political affairs, peace and security, Salamatu Hussaini Suleiman, told reporters that ECOWAS needed a formal request from Mali for a stabilization force, which it expected to receive soon.
Suleiman told the Security Council time was running out in Mali and that “a council mandate to deploy a stabilization force in Mali will constitute concrete and decisive action.”
“Every day that we postpone concrete action offers the terrorists and criminal networks yet another opportunity to consolidate, another opportunity to commit atrocious war crimes and worsen the plight of populations in the north,” she said.
The lead mediator in regional efforts to end the unrest, Burkina Faso Foreign Minister Djibril Bassole, travelled to Mali’s rebel-held north for the first time this week and told rebels they must cut ties to “terrorist movements” like Al Qaeda before any peace talks could begin.
Sanda Ould Boumama, spokesman for Al Qaeda linked group Ansar Dine, said on Wednesday that the question of imposing Sharia was “not negotiable” and he did not make any commitment to distancing themselves from terrorism groups.
“We are defending what is written in the Koran. We are not terrorists but (warriors) who want to bring people back onto the right path. The mediator has his point of view on terrorism and we have our own,” he said.
Mali’s UN Ambassador Oumar Daou told the Security Council that while progress had been made in restoring order in southern Mali, the situation in the north was of great concern. He said the Mali government would work with ECOWAS, the UN, the African Union and others to reclaim the north of Mali.
Ban said the conflict has displaced more than 174,000 people within Mali and more than 253,000 had fled to neighbouring countries. In addition, he said 4.6 million people in Mali and more than 18 million people were affected by a severe food crisis.
Ban also said Ansar Dine had deliberately destroyed nine of the 16 mausoleums in Timbuktu that had been UN classified as part of the “indivisible heritage of humanity.”


Posted by acorncentreblog.com at 5:31 PM