Fighting Back against the Religious Right 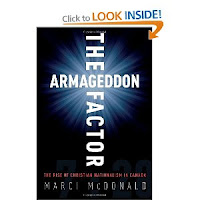 The Armageddon Factor is Marci McDonald's in-depth look at how the Christian right is building its political power in Canada under the approving eye of Prime Minister Stephen Harper.
While Ms McDonald's research and arguments are provocative, and worthy of our fullest attention, it is the Christian right's agenda that all Canadians must confront, with almost the same vigour as we confront the fundamentalist Islamic jihadists.
And the scary thing is that the Christian right has the veneer of respectability. They read the same Bible as the rest of the Christian community. They attend church services on Sunday mornings, conduct their Christian Education programs and their pot-luck suppers, and make their hospital visits like the mainline Christian churches. And yet...
Their's is a dangerous, imperialistic and militaristic form of religious practice that is equally as frightening as the Islamic thrust to "conquer" the world and make everyone a Muslim.
Their reading of scripture is a literal and judgemental reading; it uses passages from that scripture as bullets against those who might have a different view. Their interpretation of the passages of scripture is the only one tolerable, acceptable and worthy of propagation. Their opposition to gays, gay marriages, abortion, and to those whose religious views make them more open to all three is intransigent. And, at their core, they know they are RIGHT!
Their religion is worn as a form of fighting armour, not only defensive armour but also offensive armour. They are going to take the world back from the "brink of destruction" as they see it. The secular world, for them, verges on Sodom and Gomorrah, those biblical towns that threw God on the trash heap, and went their prodigal ways.
Their religion is a form of absolutism, a form of abolition, similar to the abolition of alcohol that was practiced by the Women's Christian Temperance Union. "Onward Christian Soldiers, marching as to war" is a kind of mantra for these people and they sit in the pews of all Christian faiths.
And there is another heinous aspect of their religion: they are the ultimate capitalists, in that practice, because whatever methods are necessary to bring their numbers of new members up and new dollars into the coffers are acceptable. And they take it as a sign of God's "blessing" on their efforts to see large numbers of people in their growing churches, just like the corporate giants whose efforts to produce gigantic profits are "doing something right" according to their own estimate of their worth.
They preach, as does James Dobson, founder of Focus on the Family, a brand of salvation that is instant, and known only to those whose testimony attests to their "acceptance of Jesus Christ as Lord of their life," and they take as their meaning of that aphorism that they have been granted the "keys to an afterlife in heaven."
Their certainty about their own righteousness, and therefore their agenda, both in evangelism and in political action, are the directions of God, through his Son Jesus Christ. Their faith knows no doubt, no scepticism, no scholarship, no acceptance of any of these qualities and approaches, and no tolerance of those whose faith includes doubt, scepticism and scholarship.
And, as a political movement, both within their own churches and in the body politic, they are virtually unstoppable, like a cancer metastasizing into every corner of our lives. And they will not negotiate, nor will they stop in their efforts to practice a religion of the "saved" and the "unsaved"...with them being the former, and the rest of the world, the latter.
There is a sanctimoniousness about their practice of their religion that makes me vomit.
There is a form of bigotry about their practice of their religion that verges on hate crimes.
There is a form of self-righteousness that permits no humility, and no gray areas of belief, or of practice.

There is also a kind of plastic cookie-cutter sameness to their reduction of faith to a single core of beliefs and practices that leaves them repressed, frightened and frightening.
And when we think that, like George W. Bush, Harper is one of their number, for that reason alone, there must be a political opponent that confronts, and eventually supplants this form of tyranny.
Posted by acorncentreblog.com at 6:15 AM