Bacevich: U.S. too wedded to war!

From WBUR/NPR's On  Point with Tom Ashbrook, Wednesday, August 11, 2010
Andrew Bacevich: U.S. Militarism
Retired Army colonel and big thinker Andrew Bacevich on why it’s time to throw out the playbook on American military policy.
American makes too much war, says former soldier now scholar Andrew Bacevich. The country can’t afford it, he says. It’s not even good strategy anymore, he says. But it doesn’t stop.
And it doesn’t stop for a reason. A whole matrix of interests and assumptions, writes Bacevich, propel the United States toward power projection and war – even when it’s not working.
Bacevich lost his own son in Iraq. But this is not about one family. It’s about a nation, he says, too wedded to war. 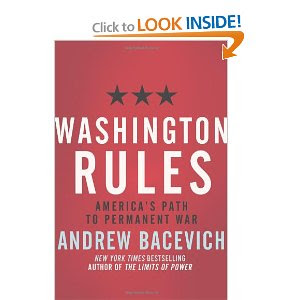 Andrew Bacevich, retired U.S. Army colonel is professor of history and international relations at Boston University. His new book is “Washington Rules: America’s Path to Permanent War.”
Finally, someone who has served, and continues as a retired military colonel, is speaking truth to power about the U.S. over-commitment, practical addition to military power, military culture, military archetypes in athletic, corporate and civilian, (even church) life.
From one who has worked in the U.S. for a few years, it is abundantly clear that, for many who do not choose university, post-secondary education is a stint in the military. And that includes boot camp, stationing at one of hundreds of posts around the world, and then returning with a new-found "perspective" that continues the power of the gun, the power of the uniform, and the power of the blind commitment to a kind of black-and-white authority in local organizations and within families.
It has been said that the NFL is a form of religion for U.S. patrons. It says here that the military is an even more revered, sacred form of religion. Fighting for "American values" no matter where they might be threatened, or perceived to be threatened, including the taumatic and dishonestly-based war on Iraq, from which the U.S. will need probably a century to extricate itself from the shame of that military intervention, is so intimately woven into the country's belief in itself, that the constitution even states it is a requirement for all citizens "to take up arms" if and when the government demands.
Bacevich's argument, however, goes far beyond mere individual attitudes, metaphors and symbols. It goes to the heart of the effectiveness and even advisability of using war as an instrument of global policing, of global insistence on keeping America safe and secure. It simply doesn't.
And that Americans, collectively, politically and ethically, will have to "get over it!"
Having the largest military arsenal, and spending more on military budgets that all of the other world powers combined, has not, and is not, and will not in the future keep America safe. Even Secretary of Defense, Robert Gates, has announced a (for America) dramatic cut in miltiary spending of some ten percent.
There is a history to the "war commitment" that Bacevich's book outlines, but coming from one who has served, and who has lost a son in the second Iraq conflict, this piece of courage, even prayer, of the highest intelligence and the highest patriotism and the highest motives, will have to be noticed by the "establishment."
Politicians and leaders of corporations have come from the military, even the reserve military. The uniform is a symbol of respect and a symbol of a calling that, although brutal and bloody and often tragic, evokes dreams of heroism, and of romance and of travel and of the latest technoloigcal hardware and skills to deploy that hardware, and then dreams of returning to civilian life with a career and a philosophical and practical training suited for any vocation.
Begun in revolution, the country continues to believe, wrongly, that a point of view is effectively driven home with the point of a rifle, a machine gun, an AK-47, or a rocket, or a fighter jet or missile, a nuclear submarine, an unmanned drone, or...and who knows what the next vision/version of 'star wars' might look like, with the U.S. military's budget and call to dreamers.
And the chickens are coming home to roost. Bacevich contends that the whole culture, including the playbook, has to be re-thought. He wants to increase defences, and argues that 9-11 resulted from unprepared defences. He wants a severely scaled-down operational capacity for more limited interventions and he wants a rethinking of the "rush" to large military interventions "to defend the interests of the United States."
Now, with such radical proposals, especially for a country steeped in the miltiary traditions, there may even be such a significant reduction in both military spending and in threats to foreign powers that more and effective attention can be paid to teaching, health care, nutrition, and the restoring of the middle class to a position of respect, while America's respect in the councils of power around the world is enhanced.
How ironic that would be. And also how much safer would that make both Americans and those of us who live in such close proximity to the giant Pentagon, the symbol at the heart of the American experience.
Posted by acorncentreblog.com at 4:30 AM