The Secret History of the War on Cancer: the Book 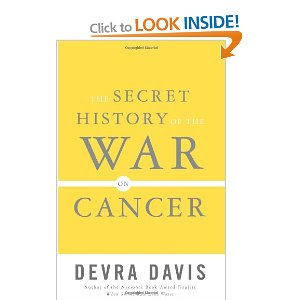 In her compelling book, The Secret History of the War on Cancer, Devra Davis picks away the layers of collusion, cover-up, denial, lobbying and outright lying that have comprised much of the last hundred years of a conflict between the interests of the large mega-corporations, like DuPont, and the life-saving interests of thousands, perhaps hundreds of thousands of lives that were sacrificed to keep the corporate, chemical secrets hidden.
Telling secrets is never a "friend-generating" sport; and in these cases, Davis takes the gloves off, for many reasons, not the least of which are the preventable deaths of her family members, if the full truth of the dangers of certain elements, compounds and the conditions for working with those chemicals had been disclosed fully, honourably, and at a time when those secrets were fully known.
Isn't it strange, or perhaps not, that while the rocket scientists who had been producing German rockets during WWII found employment in the U.S. immediately after the war, and began seamlessly producing military materiel for the U.S., those German scientists and medical professionals who had done so much to advance the cause of fighting cancer were not so "acceptable," or "needed" in the post-war American consciousness of the dangers of carcinogens. You may recall that the Germany of the Third Reich was as opposed to the known causes of cancer as it was to the existence of "foreign" and particularly Jewish contaminants in their perfect Aryan race war. Hitler, himself, applied mustard dressings to his dying mother's open chest sores, as she struggling, in vain, against the ravages of her cancer.
And yet, the list of virulent elements, especially those used in the production of dyes, like benzidine, and their capacity to inflict savage and mortal damage to those whose livelihoods depended on their working, without adequate protection, in unsafe environments.
And, the legal forces mounted against those who sought justice on behalf of their dead and/or suffering loved ones, were so powerful, so well financed, and so meticulous that many of the "expert witnesses" including Davis herself, were declared incompetent, "because they could not specifically prove that X chemical had caused Y cancer in Z person."

So, when you next hear someone describing the law as a "blunt" instrument in the pursuit of justice, remember that it is only blunt when it needs to be, when, for example the legislators are writing the laws, so that many cases can be heard under the principles of the statute, but in the cross-examination process, any question that can be devised that is not leading, is admissable. And the imagination and nit-picking of the defense attorneys also knows no limits, in pursuit of the exoneration of the complicit corporation, in the pursuit of its profits, using whatever chemicals, with whatever dangers, make that pursuit possible.
Every student of both science, and of business should be required to read, study, digest and debate the contents of this revealing book, so that George Carlin's oxymoron, "business ethics" can be reversed, and we can begin to speak legitimately of the "ethics of business."
Workplace safety, including safety from dangerous substances is, and will likely remain such a difficult and often unsuccessful battle of justice, since the lives of the victims are worth pennies, compared to the "larger value" of the corporation's ability to continue to pursue its profits, in a culture that worships at the altar of the corporation. If the "engine of the economy" is the corporation, or the smaller business entity, and the politicians seek their own re-election, for which they need  the support of both of those business/corporate entities, then it follows that the "safety" of the workers, who also need the dangerous jobs they hold, and will continue to hold, (and remember they voluntarily applied for those jobs) will take a back seat to the profit motive of their employers. And, as Davis documents, justice will come in very small droplets, infrequently sprinkled, and only reluctantly even then, on the graves of its victims.
Posted by acorncentreblog.com at 8:45 PM