(By Jim Travers, Toronto Star, July 31, 2010)
Harper’s federal party learned much of what it needed to know from the Ontario Mike Harris Common Sense Revolution and continues to benefit from both a fissured opposition and an apathetic electorate. But the critical factor, the catalyst for Harper’s transition from chattering class laughingstock to the presumptive favorite to win a third consecutive mandate, was Conservative willingness to confront and then embrace a hard truth. 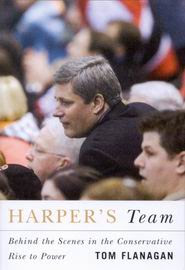 Tom Flanagan, once the Prime Minister’s mentor and now something of a nemesis, best deconstructs that challenge in his fine, must-read 2007 book, Harper’s Team. In it the University of Calgary political scientist concedes that Canada isn’t naturally the conservative country his party wants it to be. Shifting the country on its political axis, Flanagan says, is slow work best done in almost imperceptible increments.

No other Conservative has been this candid about the ruling party’s tactics and strategy. “Small conservative reforms are less likely to scare voters than grand conservative schemes, particularly in a country like Canada, where conservatism is not the dominant public philosophy”.
Agreed; we are not a country where conservatism is the dominant public philsophy. And for that we can thank Trudeau, and many others who sacrificed much to move the country to a far more compassionate and a far more humane place, that is far more tolerant than the place to which Harper wants to lead us.
And it is an apathetic electorate that, in part, permits a "fissured opposition" because when the people sleep-walk through decades of Liberal governments, more-or-less competent governance, the backrooms are left to the "backroom" guys, (and let's face it, it is so far as we know, exclusively "guys"). And their antics, along with the over-weening ambition of Paul Martin and the poorly advised Stephane Dion, leave this country with no real official opposition who can command sufficient votes to topple the Harper/Harris conservatives.
Yet, anyone who looks at the destruction in Ontario in the wake of the Harris government has to wake up to the reality that a more liberal public philosophy does not stand a chance without constant re-invigoration by new applications from new voices and new imaginations and new leadership. The public purse, in the hands of the sitting Prime Minister, and even a minority government, create an "establishment" which becomes ever more difficult to remove the longer it stays in power.
We are in danger of allowing ourselves and the country to be slowly, almost imperceptibly, nudged, pushed, even seduced into thinking and perhaps believing that Harper's goal is non-toxic, that his changes are "not that bad" and that his legacy can and will be reversed, as soon as the Liberals (and the liberals) return to power.
Apathy, complacency, a little bit of trust..even a rather short rope (of granting him a minority, and not a majority)...these are precisely the attitudes that Harper is counting on...and the more we grant them, even by default, the more the process will continue, down a path that may become irreversible.
Just ask yourself a few simple questions: Are the poor better off today than they were when Harper came to power?
Are people more secure in their jobs and in their retirements today?
Are Canadians more secure in our National Health Act today than we were when Harper came to power?
Are Canadians taking responsibility for our share of greenhouse gases, at the national level, today, after five years of Harper's government?
Are First Nations peoples committing suicide at a lower rate today, with enhanced living and working conditions, after five years of Harper's rule?
Are corporations paying their fair share of taxes, or are they being granted special favours by this government?
Do we really want more prisons, and more prisoners, under the guise of increased public security, as this government is intent on achieving, while they close the prison farms that produce their own food?
We need a new government, a more centrist, more liberal and a more humane and compassionate and more tolerant, (and more statistically responsible) government, and we need it from the next election, not the one after that.
The Harper legacy is not the one Canadians want to leave to their grandchildren. Certainly not this grandfather!
Posted by acorncentreblog.com at 8:05 AM