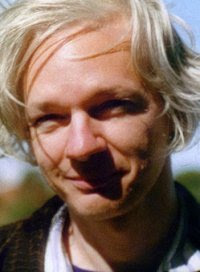 The founder of this “media insurgency,” as The New Yorker calls it, is an obsessive, anti-war Australian named Julian Assange. He is a gifted cryptographer and former hacker with a strong anti-authoritarian streak who says he doesn’t believe in official secrets of any kind. When he got his hands on the cache of Afghan war documents, he made a shrewd decision. Instead of doing a giant dump online, he decided he’d get more impact if he teamed up with the old-line media. So he contacted The New York Times, The Guardian and Der Spiegel and offered them exclusive access for a few weeks via an encrypted website. They assessed the material, decided it was for real, and synthesized it into powerful news stories that were published on the same day he put all the raw data on his website. It was the first such collaboration in media history. (Margaret Wente, The Globe and Mail, July 27, 2010)
WikiLeaks did the unthinkable, and until now, undoable. They commandeered the legitimate press into enlarging and enhancing their epic "dump" of secret classified documents.
Wente points to physicist Assange's "antiauthoritiarian streak."
It is this streak that is at the core of his life. He loves to poke the eyes of those in authority, especially those who use that authority, as he sees it, abusively, as in unnecessary war. And being opposed to war, all wars are unnecessary, as are all secrets.
So in Assange's world, there would be no secrets and no wars. Interesting....hmmmmm!
Would the elimination of secrets move us away from wars?
Would the elimination of wars move us away from secrets?
Is the kind of epic proportioned antiauthoritarianism necessary following the epic abuse of authority by Cheney-Bush?
Is Assange's providing an unanswerable, unaccountable and unmonitored encrypted website for those who have access to documents locked under various "classified" and "secret" and "national security" files an important answer to the public's right to know?
While the Army private who sent WikiLeaks the thousands of documents is waiting his military fate, is there also a criminal fate awaiting the agent? Is Assange guilty of any criminal offense, or is he merely "using" unknown and like-minded, and like-spirited accomplices for his own personal agenda?
And is that agenda in the public interest?
Clearly, the press has been co-opted by the media owners in most countries. They love to bring out smarmy stories about the sexual or financial peccadillo's of the political class, but they are not doing a very comprehensive and commendable job of investigating the larger issues, having fallen victim to the deadline and the ratings measurement of journalism, not to mention the "egoism" that underlies all journalism.
And who, what analyst agency, including the New York Times, is going to be able and willing to spend the time to make sense of the documents? Hence, what of the credibility, not so much of the miniscule facts, but of their "gestalt" impact?
Any journalist can pounce on a few of the more scarlet headlines and create a media frenzy, but it will take historians decades to analyse, with perspective and with objectivity, and with some clarity and responsibility, their full meaning, if any. And without that time and perspective, we run the risk of turning these "info-bytes" into bullets for a different kind of war, the kind that Assange wants us to sign up for.
It is a war of complicity in the campaign for information supremacy!
And it will be fought under the rules of engagement of the giant information corporations, who themselves, have their own secrets, and their own secret agendas and wars, that will remain secret and ready for disclosure when the battle warrants.

Speaking on NPR's OnPoint, with Tom Ashbrook, Daniel Ellsberg, the man at the centre of the Pentagon Papers, that helped to end the VietNam war, said that he thinks the society will lean more on the side of secrets than on the side of disclosure in the future even though he supports the release of these classified documents.
Do we want the military/political giant holding and operating from an "inside" position on information, or would we prefer the corporate giant operating from an inside position on information. Or do we really have a choice, when the military and the corporate and the political worlds are so enmeshed as to have become one "complex"...the one President Eisenhower warned us against in 1960?
Posted by acorncentreblog.com at 8:36 AM