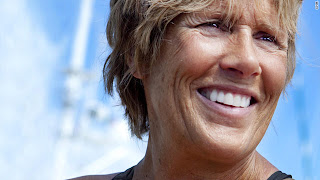 Diana Nyad,          CNN Photo
UPDATE: Ms Nyad was pulled from the water after 29 hours, because she was ill. Nevertheless, she has inspired many in their sixties to become more active and more courageous. Thanks!
By Matt Sloane, CNN, from CNN website, August 7, 2011
Diana Nyad's personal test has begun. At 7:45 p.m. ET she jumped into the water and began her 103-mile swim between Cuba and Florida.

"I'm almost 62 years old and I'm standing here at the prime of my life," she said as she walked toward the sea. "I think this is the prime. When one reaches this age, you still have a body that's strong but now you have a better mind."
Nyad did a few stretches and played reveille, the traditional Army wake-up song, on a bugle before she dived in.
She likes a challenge. At 61, a lot of people are considering retirement and spending time with grandchildren. Not Nyad. For nearly two years, she's been training to set a record for open-water swims without a shark cage.
Nyad announced Sunday morning at a Havana news conference that she planned to enter the water at Havana's Marina Hemingway to begin her attempt.
On this Monday August 8, when the markets around the world are set to open "down" because of the world's debt and deficit crisis, when many people are hunkering down to a period of extreme uncertainty, and potential economic recession, Diana Nyad, at 62 is a model of courage, resourcefulness, determination and hope.
Jumping into the water for a 103-mile swim is no mean feat for a twenty-something. For a 62-year-old, it is inspiring.
After training for two years, Ms Nyad will perhaps be tempting fate, without a shark cage. Who knows how they will react when they encounter her unprotected body's invasion of their "turf". Certainly, she doesn't know.
And the world will be watching and waiting for word that she has successfully completed her marathon.

Posted by acorncentreblog.com at 6:02 AM