By Thomas B. Edsall, New York Times, March 12, 2012
Student bodies in competitive colleges and in community colleges reflect two very different economic worlds. At the 1,044 competitive colleges, 76 percent of the freshman came from families in the upper half of the income distribution. In the nation’s 1,000-plus community colleges, almost 80 percent of the students came from low-income families.

At the same time, colleges, both public and private, have shifted their own spending priorities, modestly increasing the investment in students from families in the lowest income quintile, while sharply boosting their investment in education of students from the top income quintile. The Education Trust has produced the charts showing the shift over a 12-year period, from 1995 to 2007. 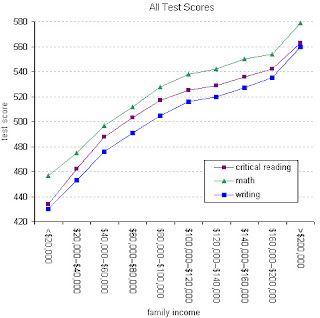 Source: College Board
There is a substantial body of evidence that the system is failing to reward students with high test scores who come from low-income families. In a 2005 report, the College Board found that among those scoring highest in math tests in 1992, just under three-quarters of students from families in the highest quartile went on to get bachelor’s degrees by the year 2000. Among those from families in the bottom quartile, less than half that number, 29 percent, went on to get degrees.

As the value of a college degree has nearly doubled, in terms of future earnings, the percentage of low income college students actually graduating by age 24 has grown by only 2.1 points, from 6.2 percent in 1970 to 8.3 percent in 2009. Among students from families in the highest income quartile, the graduation rate by age 24 has surged by 42.2 percentage points, doubling from 40.2 percent to 82.4 percent over the last four decades.
“The income-achievement gap is now more than twice as large as the black-white achievement gap. Fifty years ago, in contrast, the black-white gap was twice as large as the income gap,” according to Sean Reardon, a professor of education and sociology at Stanford, writing in “The Widening Academic Achievement Gap between the Rich and the Poor: New Evidence and Possible Explanations:”

At the same time that family income has become more predictive of children’s academic achievement, so have educational attainment and cognitive skills become more predictive of adults’ earnings. The combination of these trends creates a feedback mechanism that may decrease intergenerational mobility. As the children of the rich do better in school, and those who do better in school are more likely to become rich, we risk producing an even more unequal and economically polarized society.
The “income achievement gap” – differences in standard test scores and grade point averages – between children from families in the top 10 percent of the income distribution and those from families in the bottom ten percent has been growing. Reardon has found that the income achievement gap between children from the highest and lowest income deciles is roughly 30 to 40 percent larger among children born in 2001 than among those born in 1976.
“The children of the rich increasingly do better in school, relative to the children of the poor — that is, they score higher on standardized tests and they graduate from college at much higher rates. This has always been true, but is much more true now than 40 years ago,” Reardon told The Times in an email. “This means that social mobility has gotten rarer – the ‘American Dream’ is increasingly difficult to attain.”
Not only does a college degree significantly boost income, it also helps protect against downward mobility. The Pew Charitable Trusts found in a 2011 study that those with just a high school degree or less are 13 percent more likely to experience significant downward mobility – seeing their income fall substantially below what their parents made – than those with college degrees.
The class-reinforcing trends of higher education pose an acute dilemma for the American political system. “The built-in tension between postsecondary selectivity and upward mobility is particularly acute in the United States. Americans rely on education as an economic arbiter more than do other modern nations,” Carnevale wrote in “How Increasing College Access Is Increasing Inequality, and What to Do About It.” “Americans always have preferred education over the welfare state as a means for balancing the equality implicit in citizenship and the inequality implicit in markets.”
Politically, the lack of access to a four-year college education is a crucial problem for one of the key battleground constituencies of 2012: whites without college degrees. Several issues that can be mined by enterprising politicians cluster around this debilitating lack of access — in fact they help cause it — including the enormous debt loads carried by students and recent graduates, as well as the emergence of for-profit colleges saddling low-income students with loans for programs they cannot complete. The data show that a disproportionately large percentage of young adults from working-class families who, according to their test scores and grade point averages, are equipped to earn a B.A., are either not going to college, or failing to finish — relegating them to a life of stagnant or declining wages. There is a reservoir of resentment over this fate waiting to be tapped by either party.
As a "white male" from the lower middle class, who was afforded the opportunity to attend a first rate university in 1959, I am forever grateful for that opportunity. Subsequently, I was also able to attend two other first-rate Ontario universities for the opportunity for further learning. And when Rick Santorum calls President Obama a "snob" because he graduated from both Columbia and Harvard, after having endured a economically disadvantaged early life, he is reflecting part of the political thrust of the divide outlined in Edsall's piece. However, Santorum is tapping more deeply into a seam in the American consciousness that resents both learning and its fruits, including research, more empowerment for women's right to control their bodies, and more opportunities for women to graduate from the nations best schools, and then take their place as leaders in the country's best companies and non-profits. The "divide" in the U.S. has gender implications, as well as economic implications, as well as "values" implications and so long as the current batch of Republican candidates for president continue to advance the cause of the wealthy, and ignore the plight of the economically disadvantaged, the Democrats, and the President, can confidently, but not presumptively, proceed to campaign on the issues for which the Democrats have earned a responsible and a legitimate positive repuation, that is on everybody sharing in the abundant opportunities still available in that country.
And if the Democrats can find a way to tap into the plight of working class families, including how to enhance the potential of their children's attending first-rate post-secondary schools, they will find even more willing and eager voters pulling the lever for Democratic candidates, including the President.