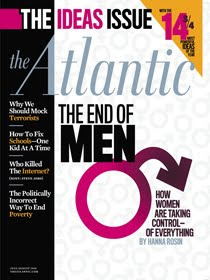 The End of Men
Earlier this year, women became the majority of the workforce for the first time in U.S. history. Most managers are now women too. And for every two men who get a college degree this year, three women will do the same. For years, women’s progress has been cast as a struggle for equality. But what if equality isn’t the end point? What if modern, postindustrial society is simply better suited to women?(By Hanna Rosin in the June 24 edition of The Atlantic)
In her piece, Rosin cites social intelligence and communication skills as core values in the postmodern society, and that women have proven to "shine" in these areas, more than men. She also cites the decline of economic sectors like construction and real estate where men have prospered. It is also men who have taken the largest hit in both the dot.com bubble and the Wall Street debacle, with the largest number of job losses falling to men.
Rosin also visits classes, some ordered by the court, where men are being coached to re-evaluate their place in the family, where the female partner's income trumps the male's, and where, if the woman is challenged by her partner, she threatens to call 911. And potentially, to prove the point of the lower class turnaround, she even calls him a "bitch" when she throws him out.
But it is the statistics about undergraduate degrees, 60% now going to female students, who flock to the study halls, while their male peers play video games in each other's rooms, and where the women find the advisors, counsellors and all the steps to complete in the registration process and beyond, while their male peers fail even to make contact with their male peers that is bothersome.
When a college senior reports to Rosin that "Men are the new ball and chain," you know that the attitudes of these women towards men have gone over the top, and the part that men have played in the development of this attitude is tragic.
Have men given up on themselves?
Have men accepted their "assigned" role and status as "the third thumb"?
Have men retreated to the seclusion of their video games?
Have men forgotten how important they are to the family structure, culture and stability?
And more importantly, are men now beyond reach, in any attempt to balance the enrolment stats, in colleges and universities?
One community college president, when he began, initiated a program to recruit male students, provide mentors and coaches, and after a few years, the female enrolment was still far ahead of the male enrolment. And of those male students who did enrol, including the best brains, some dropped out because they lacked both motivation and support systems.
As one professional candidate (female) put it, "I want to date after graduation but I know I am putting myself in a very small pool." (In other words, will there be a pool of equally qualified men from which to select a dating partner and eventually a marriage partner, especially given the high percentage of families now headed by single women.
How does this society reclaim the engagement of one half of the gender pool, so that our children are given a full range of opportunities to develop their whole person?
Posted by acorncentreblog.com at 6:13 AM