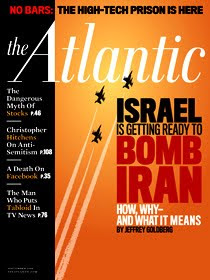 I have just read Jeffrry Goldberg's piece, the cover story in this week's Atlantic, about the potential of either or both an Israeli and/or and American attack on the nuclear production facilities in Iran. It is so compelling reading that all who are interested in the geopolitical forces moving this decision would do well to study and absorb its complexities.
At the core of the debate, from the Israeli perspective, is the question of understanding President Obama. As one source told Goldberg in general, we pack our thermometers and go to Washington to take the temperatures of all the players many times. Rahm Emmanuel argues that Israel can walk and chew gum at the same time, so they can both prepare their position on an Israeli attack on Iran while simultaneously preparing for peace with the Palestinians. The U.S.'s Chairman of the Joint Chiefs, Admirable Mullin, indicates his ambivalence by declaring that an Iran with nuclear weapons and an attack on those weapons by anyone, would both have disastrous consequences in the Middle East and around the globe. When asked by David Gregory, on Meet the Press, which alternative he would recommend to the president, he deferred.
Obama has indicated that no options, including the use of military force, are off the table. And yet, he consistently urges the ramping up of sanctions against the Iranians in the hope that they will come to their senses and stop their headlong pursuit of nuclear weapons and the production facilities needed for them.
The Pentagon seems to oppose a military strike; Defence Secretary Gates indicates a military strike would merely postpone the successful development of Iran's nuclear weapons by one year.
On the other side, is Prime Minister Benjamin (Bibi) Netanyahu whose brother was killed in the Entebbe raid in the Uganda of Idi Amin, and whose father has written a history of the Jewish extermination in Spain in the 12th and 13th centuries. Some Jewish observers have indicated that peace with the Palestinians will come only after the Prime Minister's father dies, because one of the centreal tenets of the PM's life, is to demonstrate that he is not weak to his father.
There seems to be general agreement that sometime in the next twelve months, probably closer to March 2011, the Iranians will have achieved nuclear capability. Whether that means one device or more, is still uncertain. What seems more certain is that Israel, if it undertakes a military strike, will have only one window of opportunity, especially since it will requires Saudi airspace for its jet fighters, and the Saudi's would look badly in world opinion to be permitting multiple passes over its territory by Israeli jets, in their attack on Iran.
But even the Arab states are upset by the spectre of an Iran with nuclear weapons and support the proposal of a strike by the U.S. And they, too want to know the intentions of the Americans, through their president.
The Israelis do not want to formally inform the U.S. of a specific plan to strike, because that U.S. does not want to be facing the spectre of an Israeli attack without its "knowledge"...so the game of talking, without formally talking, and listening without hearing anything goes round and round.
Meanwhile, the intelligence seems to suggest that the Iranians are having some difficulty with their centrifuges, after the Americans made it difficult for them to acquire the needed materials as part of their sanctions.
Yet, the Iranian desire to eliminate the Jewish state, whether through nuclear attack or not, will, over the long term, drive many educated professional Jews from the homeland, thereby reducing the state of Israel to a lesser grade state than it is at present. Scattering the Jews to all corners of the world will change, forever, the nature of the Jewish people and their claim to a homeland. Nevertheless the Iranian threat is real, and as Netanyahu asks, "Who wants a crazed bunch of mullahs holding nuclear weapons in Tehran?" or words to that effect.
And the world will watch, and wait adn speculate while many in the Israeli military display a photo of three Israeli jet flying over Auschwitz, at the invitation of the Austrian government in World War II...as their current spokepersons say, "We were too late then, but now we are ready!" Is Iran the newest version of Auschwitz?
Posted by acorncentreblog.com at 9:11 AM