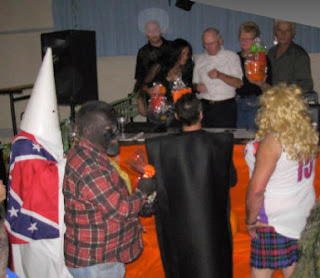 This is the picture (from Toronto Star, November 3, 2010) of the party at the Campbellford Legion Halloween Party on Saturday night, showing a KKK "member" pulling a "black man" around on the end of a noose.
At least one person, himself a black who attended, left the party in disgust. Anyone of us would have shared his disgust, but apparently, even after hundreds of phone calls in protest, an investigation is still in progress.
Why, for example, did those hosting the party not declare the costumes unacceptable?
Why were these two people permitted entry into the party in the first place?
Why did it take those hosting the party so long to recognize the horror of the scene that was unfolding right before their eyes?
Cleaning up the harm that has been caused, to the Legion, to the citizens of Campbellford, and to the people of Ontario will take a long time, because we are all ashamed of this outrage.
Posted by acorncentreblog.com at 2:37 PM